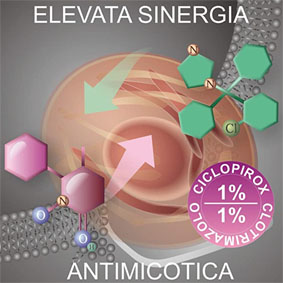 [SPORAX] – A potent cocktail of clotrimazole, ciclopiroxolamine, Zinc ion and tridecyl salycilate is capable to struggle radically the Pityriasis versicolor, even the repetitive and the intermittent ones.

The term pityriasis, evoked by Malassezia spp. a yeast, is used to describe skin conditions in which the scale appears similar to bran. The multiple colours of pityriasis versicolor give rise to the second part of the name, versicolor. Pityriasis versicolor may be called tinea versicolor, although the term tinea should strictly be used for dermatophyte fungus infections, and so commonly Pytiriasis versicolor should be treated with sulphides at high concentrations and novel antimycotics are welcome to avoid the super infection by fungal aggressions, Tineas should be treated with clotrimazole, as the fungi evoking Tineas are sensible to this remedy.

I have discovered and I am proud to disclose in this report that by using a special medical device, that is a shampoo, a complete defeat of the Pityriasis is guaranteed after one week of application of the product.

I have prayed the volunteers, 7 policemen, to spread the product onto the area injured by the Pityriasis without rinsing with water, and keeping the cosmetic directly on direct contact with the skin for 6-8 hours (during the night especially) for some days of treatment (one entire week).

Some AA, objectively, had heralded that the sulphosuccinate ion (typical of the surface active agents or detergents used in shampoos or bathing mousses) is able to transport panthenol or tocopherol through the stratum corneum into the derma when the environmental temperature is that of the body itself (body temperature is thus achieved when the man sleeps).

Pityriasis versicolor is a common yeast infection of the skin, evoked chiefly by Malassezia spp., in which flaky discoloured patches appear on the chest and back.

Often Malassezia furfur occurs onto hair scalp and dandruff is the consequent effect.

Once upon a time Malassezia was called Pytirosporum ovale and was considered anyway a fungus, and not a bacterium, as many ancient AA liked to agree.

The patches may be coppery brown, paler than surrounding skin, or pink. Pale patches may be more common in darker skin; this appearance is known as pityriasis versicolor alba.

Pityriasis versicolor is usually asymptomatic, but in some people it is mildly itchy.

In general, pale or dark patches due to pityriasis versicolor do not tend to be more or less prone to sunburn than surrounding skin.

Objectively Pityriasis veriscolor should be treated using sulphides, as Selenium or Potassium sulphides in saturated solutions, and all mycosis evoked by the fungi responsible of Tinea corporis or cruris (Microsporum, Epidermophyton o Tricophyton, especially Trichophyton rubrum and Trichophyton mentagrophytes) might be tretated using econazoles and its derivatives.

Pityriasis versicolor most frequently affects young adults and is slightly more common in men than in women. It can also affect children, adolescents and older adults.

Pityriasis versicolor is more common in hot, humid climates than in cool, dry climates. It often affects people that perspire heavily. It may clear in the winter months and recur each summer.

Although it is not considered infectious in the conventional sense, pityriasis versicolor sometimes affects more than one member of a family.

Young men which are victims of all these prejudicial conditions are often policemen or other workers belonging to security forces, as they are coacted to wear vests and uniforms made of Kevlar or polyesters.

Especially they who have to bear for hours and hours belt guns tend to suffer from pityriasis versicolor.

When they refresh with ice or cool water their injured flesh, especially in hot and humid days, skin becomes clean and clear, and this is the symptom that heat is the major responsible of the occurrence of the syndrome, when yeasts or fungi are prone to proliferate onto the skin.

I have had the chance to encounter a medical device that is extra rich in substances apt all together and synergically to struggle definitively this fastidious and recurrent syndrome in men.

The sole discovery I have done and I am proud to disclose in this report in using this product, is that notwithstanding the product is a simple shampoo, I have prayed the volunteers, 7 policemen, to spread the product onto the area injured by the pytiriasis without rinsing with water, and keeping the cosmetic directly on direct contact with the skin for 6-8 hours (during the night especially) for some days of treatment (one entire week).

Some AA (2) heralded that the sulphosuccinate ion (typical of the surface active agents or detergents used in shampoos or bathing mousses) is able to transport panthenol or tocopherol through the stratum corneum into the derma when the environmental temperature is that of the body itself (body temperature is thus achieved when the man sleeps).

This is fundamental to reinforce the barrier effect of the epidermis against aggressive external agents, in this case pathogens, idest yeasts and fungi.

It is not to be forgotten that egg yolk is rich of panthenol, for this reason when the chick is born, it is covered by its natural plumage.

Panthenol (and even tocopherol, the major anti oxidant natural biomaterial in Nature) are very important for skin health in Man.

Zinc ion is also known for its antiseptic activity. Studies have been conducted on cultures of microorganisms such as E. Coli, S. Aureus and C. Albicans. These show that zinc has the ability to inhibit bacterial and fungistatic proliferation. Moreover it reveals an excellent cicatrizing action.(3,10)

So, meanwhile clotrimazole is indicated to combat Malassezia spp and at some concentrations and condions of pH even Pytirorsporum orbicolare, ciclopiroxolamine to struggle Trichophyton rubrum and Trichophyton mentagrophytes, responsible of several forms of Tineae, Zinc ion is welcome for its healing ability, its antioxidant and anti-inflammatory property its ,antibacterial and antifungal functions, tridecyl salycilate, being a BHA, even if not an effective exfoliator, acts as a bland abrasive without irritating the area where it is spread.

All the seven policemen (A,B,C,D,E,F,G) have been always suffering from Pytiriasis versicolor since early age, particularly from April till November, the hottest seasons in Italy, and their psychological traumas has always been in every case when they had to wear swimsuits or bathing costumes, during summer holidays.
They had always tried with all types of econazole and derivatives, but after bathing and the fortnightly physiological keratinocytes turnover the flaky patches re-appeared always: thay attempted with grey tea in coconut oil or garlic in plain yogourth, to spread before to go to bed. Each of everybody were unsatisfied of their prior attempts before to decide to accept o try to undergo to my experimentations, some of them was hesitant since they frightened the shampoo, when exsiccated onto their skin, risked to irritate his groin etc.
Of the 7 subjects, one (F) is mulatto and another (D) is black: in the first case patches are copper coloured, meanwhile in the second case the colour of scales is ivory.
The other 5 individuals present a reddish colour, from crimson to cardinal red.
It is remarkable that Case E is a phototype I, and Case B suffers from Tinea corporis, instead of Pytiriasis versicolor (some dermatologists had asserted it was Tinea versicolor, but examens made on the scales showed the absence of malassezia spp.).
Anyway scope of my study was to eliminate the differences of dyspigmentation by rendering all the skin that was injured by Pityriasis versicolor, homogeneous and the flesh-coloured skin equal and without any sort of shadings of the prior denticulate jaggednesses (copper, ivory or crimson, according to each of every case of the policemen).
Empire Thespian was a cosmetic powder at the end of XIX century, beloved from rich ladies, apt to camouflage the imperfections of skin and was able to give three types of complexions and their epithets are remained in the book of memories of beauticians of all over the world for ever: Naturelle, Blanche, Rachel and these nuances, achieved after the treatment with the shampooing product, will be designed in this study, in the Table where values are recorded, as N,B and R.
I have wanted to use these three different nuances (even if they are commonly referred to ladies and in this case to harsh men) since they can give a spectacular idea of how the skin colour can change after the treatment with this revolutionary shampoo, that is a medical device; e.g. in case of mulatto (who presented copper flaky patches) his reached skin colour will be Naturelle, in case of the black volunteer (who presented white flaky patches) the reached skin colour will be Rachel and in case of the 5 white young men, (who presented red flaky patches) the colour achieved will be Blanche.
So I have prayed the 7 volunteers, who accepted willingly to undergo my experimentations, to spread the shampoo onto the areas injured by Pityriasis versicolor and let it to stay for 7-8 hours during the night (or the day, if the workers have had to perform their job during the precedent night).
The experimentation lasted one week.
Here follows Table I where the acronyms N,B or R are plotted indicating at which day of the week the single Case showed how their dyschromias tended to transform and change finally at the end of the treatment.

At the lenticular examen, skin does not present scallopings or jaggednesses at the 5th day in all the cases.

After three weeks from the original tretament, Pytiriasis versicolor, did not recur, even Cases B and G, who presented some itch, declared not to suffer from it, at that date.

The mix of all these spectacular ingredients is completely apt to defeat the Pytiriasis radically, independently from heat, humidity and race or phototype of the person.

I have had the possibility or carrying out this study only owing to a commercial Italian product, that Texia Research, famous firm in Turin, has supplied generously to me for these specific purposes.