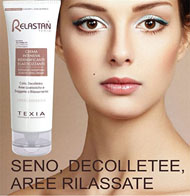 [RELASTAN] – The Dame Blanche’s balm based on the Hangman’s ointment behaves as a occlusive bandage on décolletée skin in man and woman to avoid evaporation and maintain a hydrated epidermis.

Ancient beuticians (especially those who lived in the Kings’ court)  have always sustained that occlusion of epidermis by animal waxes was the unique method to maintain a rich hydration of the neck and décolletée epidermis.

Effectively I have attempted to re-create a dermal-cosmetological  formula where the hang man’s grease (revisited and adjusted to modern concepts) that could perform the attitude to occlude and so to permit the decrease of the evaporation rate of the neck and décolletée skin, a body area that is very delicate since lacks completely of sebaceous glands and is poor of many esters of cholesterol and ceramides.

The maintenance of a good elasticity and tonicity of the décolletée is a passepartout for perennial youth of face and neck in women and men, though.

Claims of all anti-wrinkle creams herald the magnificence of the elasticity and velour effect of face skin, but neck and clavicles are not suitable to be treated with softeners, humectants, moisturizers and so on.

It is fundamental to stress that the lack of oil glands on  décolletée can cause dryness, which may accelerate the aging process and make neck appear more weathered. Neck skin also has a tendency toward laxity.

It is well known that stratum corneum  that covers our entire body  is rich of lipids, that are even  of epidermal origin and  fill the spaces between the cells, like mortar or cement.(3) The sebaceous lipids are primarily non polar lipids as triglycerides, wax esters and squalene, while epidermal lipids are a mixture of ceramides, free fatty acids and cholesterol. The composition of the sebaceous lipids is unique: Human sebum is a mixture of non-polar lipids, mainly triglycerides, wax esters, squalene, fatty acids and smaller amounts of cholesterol, cholesterol esters and diglycerides. (4-7)On the other hand, lipids produced by keratinocytes are a mixture of almost equal proportions of free fatty acids, cholesterol and ceramides. (8)

Before the new century some AA disclosed that prolonged occlusion can induce stratum corneum barrier damage, alterations in stratum corneum hydration or water-holding capacity (WHC) lasting longer than the occlusion time. They referred that TEWL showed an increase reaching a plateau on day 2. Hydration and WHC did not show significant changes. Hygroscopicity showed the highest level on day 1, decreasing during the following days. A highly significant correlation between capacitance values and the WHC could be detected (p < 0.0001, r = 0.8206). No correlation could be detected between hygroscopicity and TEWL, concluding that prolonged occlusion induces barrier damage without skin dryness. Occlusion also induces an increased hygroscopicity howbeit any  correlation has never been identified between these two findings.(9)

So it is important to emphasize always that a prolonged occlusion of neck skin induces barrier damage with no evident skin dryness, the skin hydration grows, indeed, and may be calculated by recording the evaporation rate measured by special devices like evaporimeters.

History that has been always considered   magistra vitae discloses an avalanche of ancient  novelists of past centuries  who recount that men and women who   used to wear constantly gorget (from Middle Age till XVII century) and even nuns who were forced to wear wimples often even when went to sleep in the night  together with other sisters in dormitories, after removal of the gorget or the wimple showed always plagues and lesions, due to infections evoked by parasitic agents.

Necks of notable people and females belonging to nunneries  grew elder and injured before the physiological time commonly prescribed by Nature, since the absence of the peculiar lipids and oily glands in neck and décolletée did not prevent assaults from parasites and bacteria especially Gram+.

Fiction author Margaret Frazer reported in “The Prioress’ tale” (10) the custom of nuns of spreading the Dame Blanche’s balm all around their neck and clavicles after having removed the wimple.

Dame Blanche’s balm  was made with Hang man’s ointment:

This hanged man’s grease (also called “poor sinner’s fat”) was the  fat taken from the corpses of hanged men. It was believed to work as a salve when applied to limbs suffering from lameness or restricted blood flow, arthritic joints, and it even aided in the mending of broken bones. It was, of course, a commodity that executioners had access to in quantity, and allowed many of them to work as pharmacists and apothecaries as well as doctors and surgeons.

In 1662 the  physician Johann Joachim Becher of Bavaria wrote that all apothecaries should keep an ample supply of no less than 23 types of human by-products in stock for the creation of different remedies.The executioner as doctor was one of the few professionals who were allowed to cross the boundaries of the social hierarchy without stigma. Lower-class individuals often went to the executioner for his knowledge of herbal medicine and ability to set bones, and it wasn’t unheard of for members of the aristocracy to appoint executioners to high-ranking positions—in a medical capacity, of course. King Frederick I of Prussia appointed an executioner from Berlin as his personal physician in 1711, and it was his grandson, Frederick the Great, that issued a decree making the executioner’s right to practice medicine legal

Proves effectuated with the aids of a revisited  Pichés’ atmometer onto the skin that has been occluded by the employ of our medical device for almost three days are very amazing. (this instrument is constituted  by a common tube  of glass, U shaped,  full of distilled water and covered by a simplest paper  filter at one extremity meanwhile the other extremity is appliqued on the neck where the vapour emission must be measured).

Measurements are carried out in the dark and evaporation is recorded on the scale of the glass tube and shows the rate of evaporation (mm/day).So, we repeat, scores are plotted reading directly  the scale on the glass cylinder of the Piche’s atmometer and numbers represent the mm of vapour that using the just tables of conversion can give the value of the mass of water evaporated during the day.

Values of evaporation decrease dramatically  at day 2 and more  at day 3, during the occlusion by the application of the medical device the night before to go to sleep.

Measurements were made at dawn for seven days.

And more precisely these are the functions useful to comprehend why skin evaporation rates are measured in mm.

And keeping on account that the following symbols do represent:

T °C that corresponds to the Air temperature (24 h average):

The Daily reference physiological evaporation will be calculated by the following equation and the value is expressed in mm.

In order to confirm our scopes of this research we have decided not to use a Tewlmeter to measure the water loss during time, because these values are drastically different from values recording skin evaporation (3). TEWL (generally measured on the left  forearm) (1) shows a normal range of 3.9-7.6 g/m2h and a small inter-individual variability [coefficient of variation (CV) 19.4%, meanwhile

the values of skin evaporation effectuated by the aids of a Piché’ s atmometer (an evaporimeter we have made on purpose by colleagues belonging to the Faculty of Physics) are expressed in mm/day, reading the value on the scale of the glass cylinder (the scale goes from 0 till 100mm).(2)

In our study we have had to modulate the results, that is that the real value is expressed in mm/7h, since the common sleep time is  7 hours pro nocte.

Here, indeed, follows the complete formula of our medical device.

It is interesting to notice that the mix of the first five ingredients does embody the real composition of the Hangman’s grease, while ceramide 1 and 6, phytosphingosine, cholesterol and allantoin represent the extracellular “mortar” that keep attached the accomplished keratinocytes outcoming from stratum basale and represent the protection against bacteria, symbiotically with the Boswellia serrata extract, that is recognized as a potent antimicrobial agent (11).

I have recruited 5 (five) individuals, all different both for age, sex and occupation.

All the five volunteers were prayed to spread generously the cream onto the décolletée in the night before to go to bed.

At dawn after the same night, the operator made the normal measurements using the Piché’s evaporimenter and recoded values that are reported in the following Table I.

Before the very first application (Day 1) skin neck evaporation rate of each of every individual was determined and plotted  in the same Table I.

It is very interesting to notice that right after the first application (7 hours of occlusion by the employ of the medical device spread onto the neck and décolletée) Piché’s value has dropped by half and at day 2 the value reduced by two thirds, not so properly exactly, but anyway, according to a repetitive strategy.

After third day a plateau is reached and evaporation rate is drastically reduced from the very beginning of the experimentation.

Case E is the more impressive, since his evaporation rate is very low just at the beginning, anyway after one week his Piché’s number is equal to all the others.

We conclude that occlusion  (by means of a cream that behaves as a bandage, since contains paraffinic waxes apt to inhibit TEWL and diminish evaporation pro day) is useful to avoid dispersion of aqueous vapour from inner layers of epidermis and skin of neck and décolletée remain more hydrated and compact.